With that title, you might be expecting a story about taking a flask to a theater, or which wine pairs best with Casablanca (Bogart’s characters would likely prefer whiskey or gin). In fact, we’ll be exploring several aspects of the long relationship between wine and filmmaking.

Legendary director Francis Ford Coppola owns two wineries, including the historic Inglenook estate in Napa Valley, which was purchased with the proceeds from The Godfather and Bram Stoker’s Dracula. It’s a beautiful chateau to visit and the wines are exemplary. Like most Napa establishments, they focus on Chardonnay and big Cabernets.

The list of current actors who own wineries or vineyards includes Kyle MacLachlan (Pursued by Bear, Washington State), Dan Aykroyd (Aykroyd, Ontario), Antonio Banderas (Anta Banderas, Spain), Emilio Estevez (Casa Dumetz, Malibu) and Fess Parker. Parker’s vineyard in Foxen Canyon, near Santa Barbara, is worth a visit. The Pinot Noir and Syrah are excellent and the tasting room features wine glasses with a coon skin cap etched onto them. For those too young to remember, Fess Parker played Davy Crocket, an early 19th century American wilderness man who wore a raccoon skin cap.

Wine itself can be prominent in film, but sometimes it just drops in for a cameo, as in two of my favorite Roy Scheider films. In Marathon Man, Dustin Hoffman stars as an NYC grad student whose life is consumed by his studies and marathon training. When his worldly brother (Scheider) visits with a great French Bordeaux in hand, he searches the kitchen for wine glasses before settling on two water glasses of questionable cleanliness. 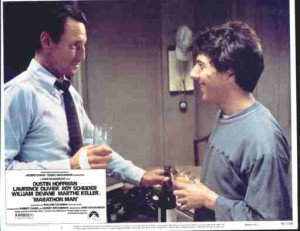 The tables are turned on Scheider’s character Chief Brody in Jaws, the 1975 Spielberg thriller. This time it is he who disrespects a fine bottle of Burgundy that shark expert Matt Hooper (played by Richard Dreyfuss) has brought for dinner. Brody, severely stressed after losing a second citizen to a shark attack, grabs the freshly opened bottle, fills a tall glass and starts gulping as Hooper attempts to protest “you should really let that breathe”

Wine takes center stage in Sideways, the Alexander Paine comedy about the last romp of a groom and his oenophile buddy who takes him tasting, and adventuring, around Foxen Canyon and the Santa Ynez Valley. They even stop at Fess Parker. Paul Giamatti and Thomas Haden Church are terrific in this film, so if you haven’t seen it and you like wine and laughs, put it in your Netflix queue.

Another great film that is wholly about wine is Bottle Shock, the story of Chateau Montelena’s improbable victory in the “Judgment of Paris”, a 1976 international wine competition that helped propel Napa to the forefront of the wine universe. Bonus points: it stars Chris Pine, who played young Captain Kirk in the J.J. Abrams Star Trek movie.

There is much more to this story than we can fit in these pages, so you’ll have to continue the journey through wine and film on your own. Bon voyage.