I once heard a policeman say his job was 90% boredom punctuated by 10% terror. The work of anyone who grows and produces their own wine is markedly similar, except the grapes don’t shoot at you. A vastly disproportionate amount of a winemaker’s annual workload is devoted to a flurry of activities in the weeks between the ripening of the grapes and the end of fermentation, collectively known as “the crush”. Here in the Santa Cruz Mountains, the crush usually begins in late September or October.

Everything must be done quickly and carefully, as any mistake or delay in the process can result in bad wine, or even vinegar. Mother Nature gives us grapes, but she seeks to destroy our winemaking efforts in many other ways, including but not limited to mold, bacteria, fruit flies, not enough oxygen or too much oxygen. Now back to the good stuff.

When each block of a vineyard achieves the perfect degree of ripeness, as judged mostly by the sugar content, or Brix, the grapes are harvested. Workers handpick the fruit, often working under Klieg lights in the cool morning hours before dawn. The cooler the grapes are when picked and crushed, the better chance you’ll have to make great wine from them. 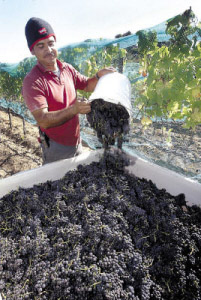 By ten o’clock in the morning, the bins of grapes from today’s block are picked and ready to move to the crusher/de-stemmer, which will separate the stems, the skins and the juice. The stems are discarded. For red wines, the skins and juice are placed in fermentation bins where yeast is added. White wines are fermented with little or no contact with the skins, while pink wines stay in contact with the skins for a day or two. By the end of the day, primary fermentation, the process in which yeast convert sugar and oxygen to alcohol, begins.

The skins eventually float to the top of the bin and cut off the supply of oxygen to the yeast, so each bin much be “punched down” twice a day throughout the primary fermentation, which takes anywhere from a few days to a few weeks, depending on temperature and other variables. 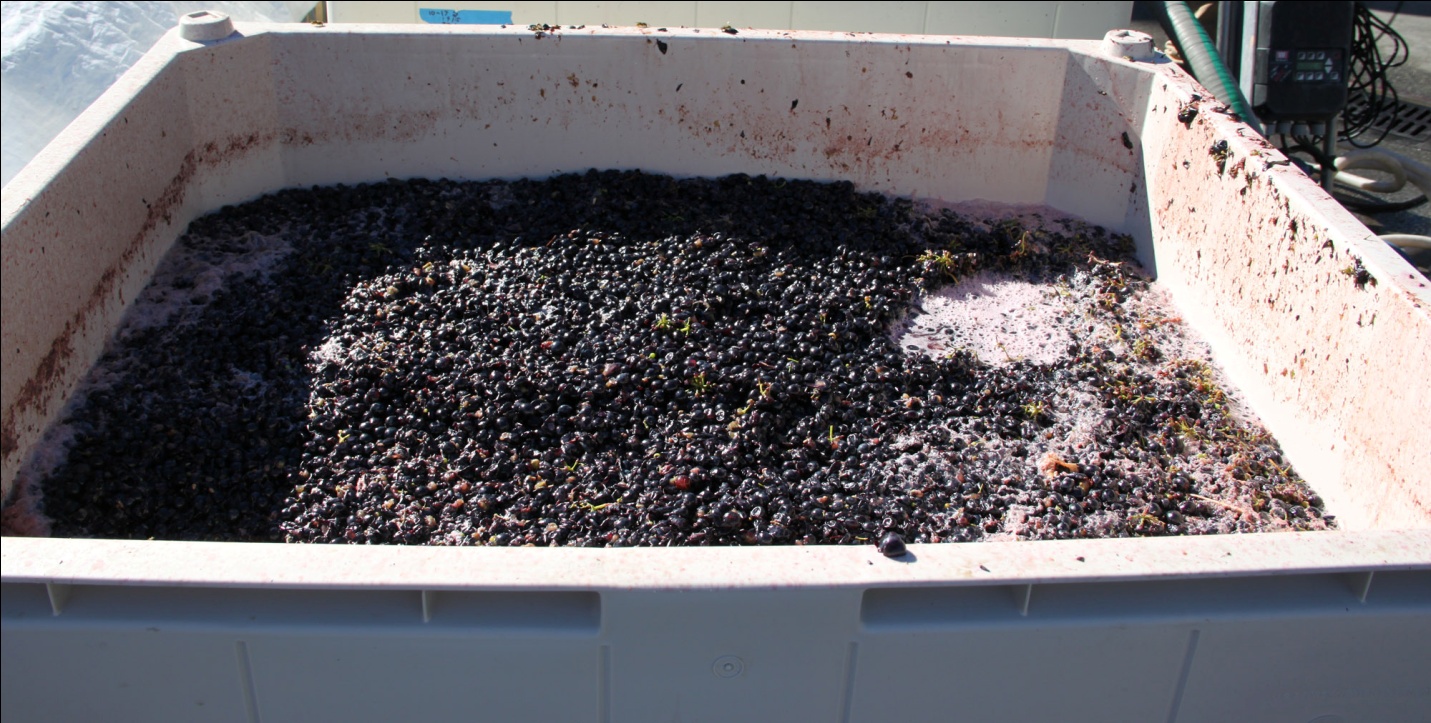 Meanwhile, the grapes picked on earlier days will be in different stages of the process, so in addition to picking, crushing and fermenting, during the crush there is always “racking” to be done – moving wine from bins to tanks to barrels. As I’ve no doubt mentioned in the past, some winemakers arrange the fermentation tanks to be up hill from the barrels, and the crush pad uphill from the tanks, so that the delicate juices never have to be pumped. I stopped by Alfaro one afternoon and observed Richard using a makeshift gravity feed system: there he was, standing atop a tank holding a hose connected to a bin that he had positioned above himself on a tall forklift.

This is an exciting time to visit a winery if they’ll have you. Some are closed to the public during the crush but stop by if you can and you’ll see a flurry of activity and hear some amazing stories.