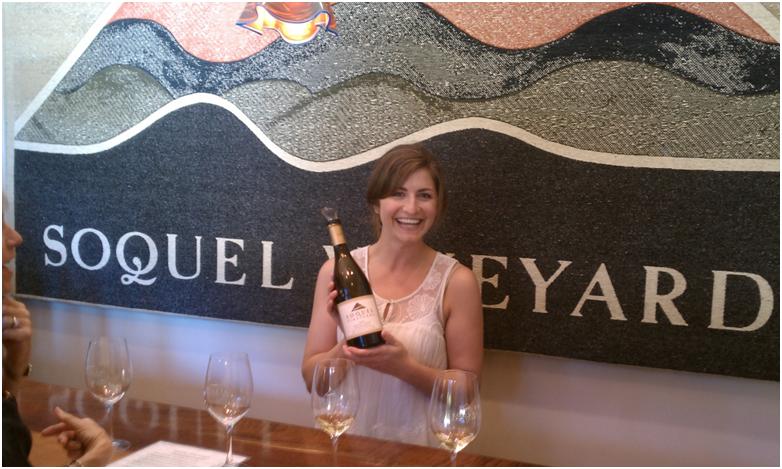 If you’re not busy on a weekend afternoon and feel like taking a drive into the Santa Cruz Mountains, Soquel Vineyards is a great destination. They’re above Soquel Village, on Glen Haven Road next to Camp Kennolyn, and were founded by twin brothers Peter and Paul Bargetto and their friend Jon Morgan. The Bargetto name has long been synonymous with winemaking in the Santa Cruz area.

The estate is about ten minutes from Soquel Village and it’s a leisurely drive. I think you’ll find that the Chardonnay and Pinot Noir are worth the drive alone, but if that doesn’t do it for you the views are sure to amaze whether you have a clear view of the Monterey Bay or the romantic visage of fog slowly rolling up the hill. 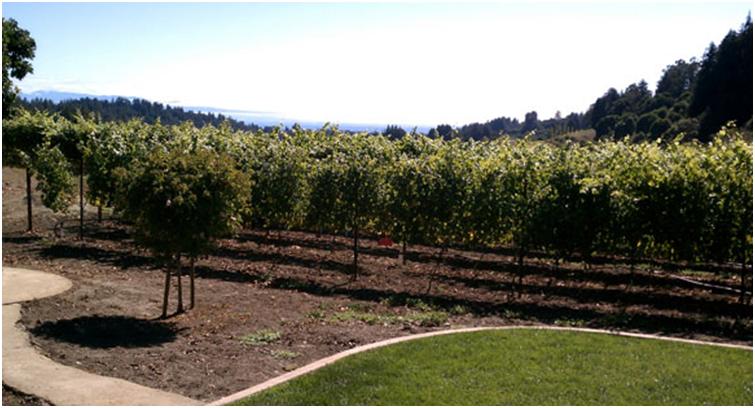 One of the stars of the tasting menu is the Partner’s Reserve Pinot, which is a blend of 16 clones from four vineyards. The 2010 vintage of this magnificent wine won the gold medal in the San Francisco Chronicle Wine Competition.

Being of Italian heritage (Peter speaks the language fluently and often visits “the old country”) the brothers always have some Sangiovese on hand. Peter might even be coaxed into offering you a barrel sample, while answering any questions you have about the winemaking process. 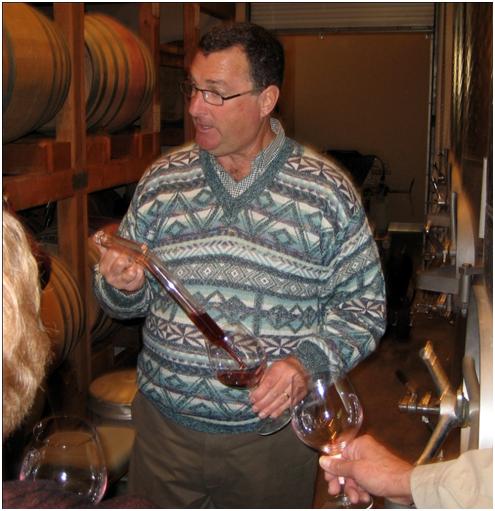 The boys don’t get to have all the winemaking fun at Soquel, as they are joined by talented and adorkable assistant winemaker Olivia Tuetschel, also a frequent presence in the tasting room.

Chardonnays are a specialty at Soquel Vineyards and O’s Chardonnay, made by Olivia, is a great one. I was lucky enough to participate in the “Boy’s versus Girl’s Chardonnay Taste Off” in the barrel room when the wines were just about ready for bottling and I can conclusively state that all the winemakers are on top of their game at Soquel.

Like every Italian-American family I know, the Bargetto’s love cooking. I can remember falling in love with this place the first time I visited, as no sooner had I taken my first taste of delicious Santa Cruz Mountains Chardonnay than Paul Bargetto approached with wood fired pizza, hot out of the oven.

Paul is always experimenting with the pizza recipes, so visiting can be a new experience every time. And the cuisine isn’t always limited to pizza. One of the best winery snacks I’ve had in recent memory was pomegranate pear mandarin pizza and sushi. You can’t get that kind of experience just anywhere. 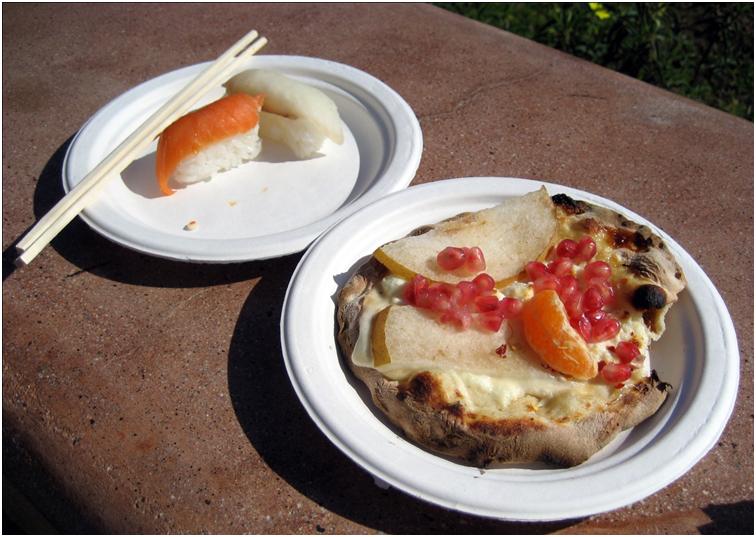 I’ve enjoyed the great wines, gourmet food and genuine hospitality at Soquel Vineyards many times and I’ve always had a great time. I highly recommend taking a trip up there.

I once heard a policeman say his job was 90% boredom punctuated by 10% terror. The work of anyone who grows and produces their own wine is markedly similar, except the grapes don’t shoot at you. A vastly disproportionate amount of a winemaker’s annual workload is devoted to a flurry of activities in the weeks between the ripening of the grapes and the end of fermentation, collectively known as “the crush”. Here in the Santa Cruz Mountains, the crush usually begins in late September or October.

Everything must be done quickly and carefully, as any mistake or delay in the process can result in bad wine, or even vinegar. Mother Nature gives us grapes, but she seeks to destroy our winemaking efforts in many other ways, including but not limited to mold, bacteria, fruit flies, not enough oxygen or too much oxygen. Now back to the good stuff. 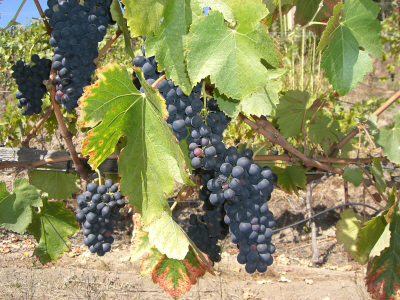 When each block of a vineyard achieves the perfect degree of ripeness, as judged mostly by the sugar content, or Brix, the grapes are harvested. Workers handpick the fruit, often working under Klieg lights in the cool morning hours before dawn. The cooler the grapes are when picked and crushed, the better chance you’ll have to make great wine from them.

By ten o’clock in the morning, the bins of grapes from today’s block are picked and ready to move to the crusher/de-stemmer, which will separate the stems, the skins and the juice. The stems are discarded. For red wines, the skins and juice are placed in fermentation bins where yeast is added. White wines are fermented with little or no contact with the skins, while pink wines stay in contact with the skins for a day or two. By the end of the day, primary fermentation, the process in which yeast convert sugar and oxygen to alcohol, begins.

The skins eventually float to the top of the bin and cut off the supply of oxygen to the yeast, so each bin much be “punched down” twice a day throughout the primary fermentation, which takes anywhere from a few days to a few weeks, depending on temperature and other variables.

Meanwhile, the grapes picked on earlier days will be in different stages of the process, so in addition to picking, crushing and fermenting, during the crush there is always “racking” to be done – moving wine from bins to tanks to barrels. As I’ve no doubt mentioned in the past, some winemakers arrange the fermentation tanks to be up hill from the barrels, and the crush pad uphill from the tanks, so that the delicate juices never have to be pumped. I stopped by Alfaro one afternoon and observed Richard using a makeshift gravity feed system: there he was, standing atop a tank holding a hose connected to a bin that he had positioned above himself on a tall forklift.

This is an exciting time to visit a winery if they’ll have you. Some are closed to the public during the crush but stop by if you can and you’ll see a flurry of activity and hear some amazing stories. 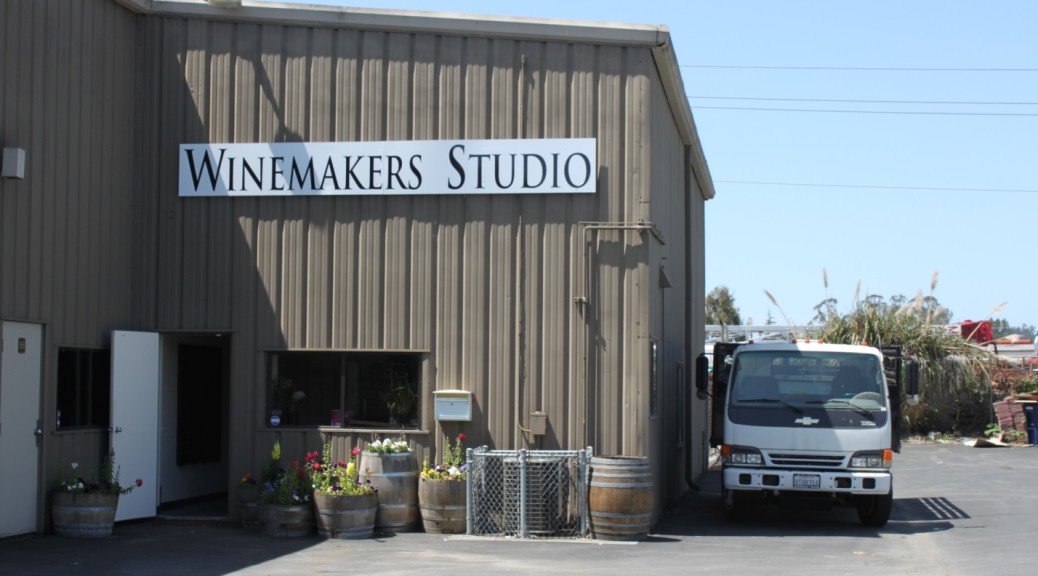 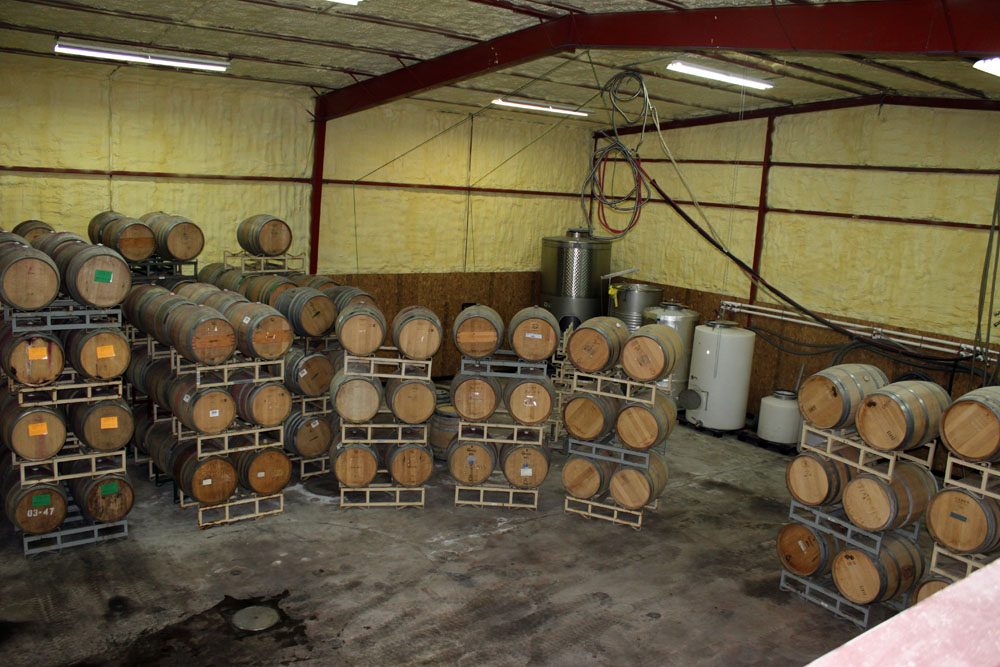 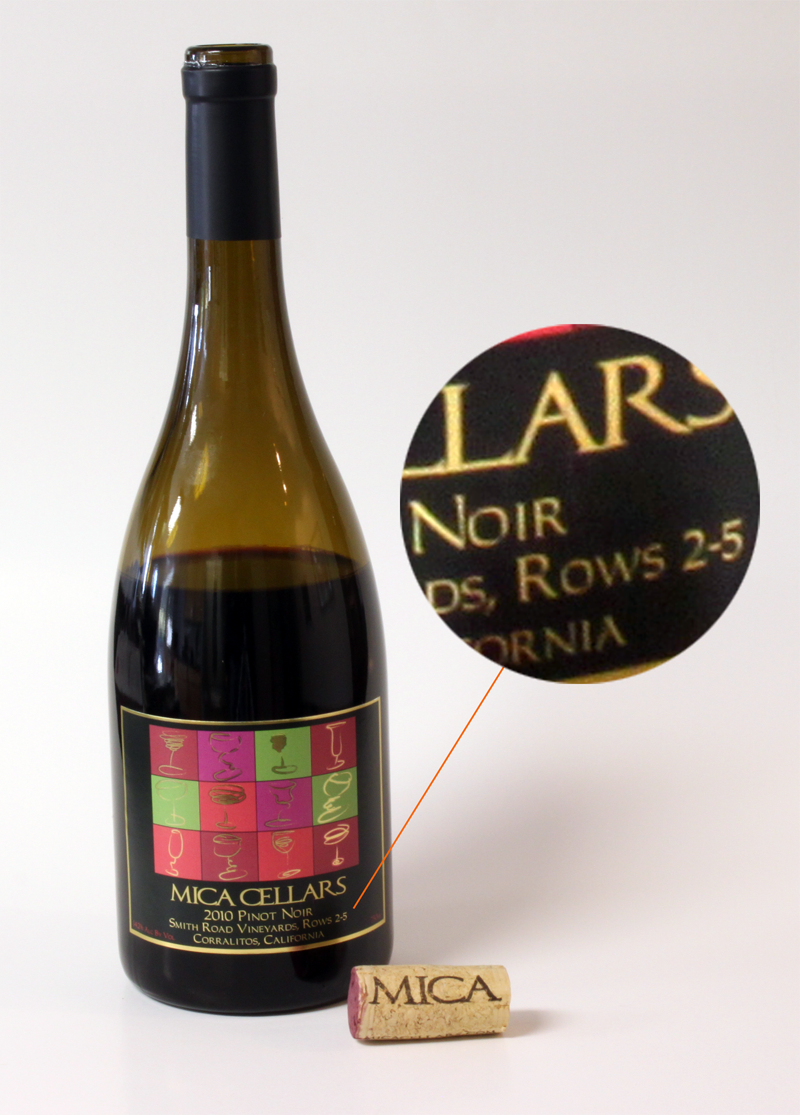 If you read our December newsletter, you know that the farmers of the Santa Lucia Highlands produce some of California’s finest Pinot Noir and Chardonnay grapes. One of their customers is Richard Alfaro of Corralitos, known locally as the founder of Alfaro’s Micro-bakery. After he sold the bread business, Richard decided to “do something different with yeast.” He and his wife Mary Kay bought 70 acres of land, started growing grapes, and embarked on a journey to create two new wineries.

Alfaro Family Vineyards makes wine using estate grown fruit. Meanwhile, Richard enlisted his childhood friend Joe Martin, a graduate of the highly regarded UC Davis viticulture school, to join him in the creation of Martin Alfaro, where they would make wine from purchased grapes. Two of my favorite Martin Alfaro wines are the Sleepy Hollow and Garys’ Pinots. The top Alfaro Family estate wines, the Lindsay Paige Pinot and Chardonnay, are among the best of the Santa Cruz Mountains.

Richard also bent the rules a little by planting a block of Merlot. This is uncommon in the Santa Cruz Mountains, but Merlot was a favorite of Mary Kay’s dad, “Billy K” Kempker. The effort paid off with a silver medal in the 2010 San Francisco Chronicle Wine Competition. The Hemmingway-esque photo of Billy sport fishing in the Gulf of Mexico makes this one of my favorite label designs. 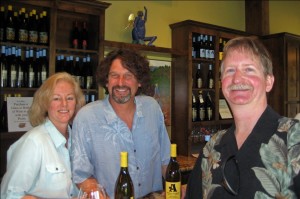 The Alfaros produce about 4000 cases per year, so you can find their wine in many local restaurants and markets. But the operation is small enough that if you stop by the tasting room on a Saturday, there’s a good chance you’ll meet Richard and Mary Kay, as I did this past weekend.

There are many more great wineries right here in the Monterey Bay area, but first we’ll be taking a brief detour to the Napa Valley, which you can read about in April.

I’ve spent most of my life living on California’s Monterey Bay, where recreation can mean hunting down a good wave, a special Pinot Noir, or some tasty seafood to put on the grill. 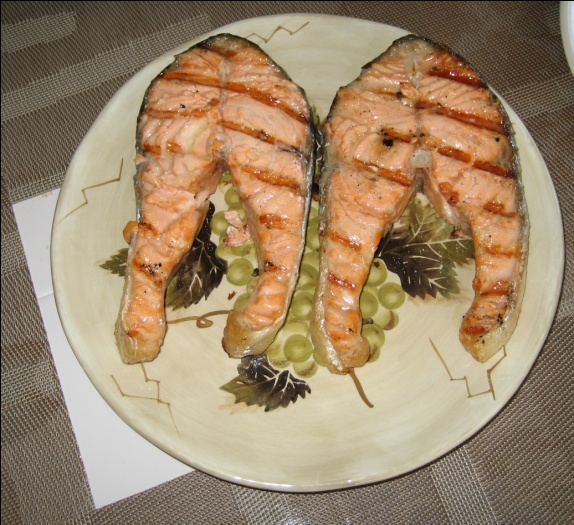 King salmon is a local favorite, and it’s hard to beat grilled salmon steaks with a little dill and lemon butter, especially if you pair it with a good local wine. The Monterey Bay is surrounded by top quality vineyards and winemakers. Corralitos, nestled in the foothills of the Santa Cruz Mountains, boasts warm, sunny days followed by frequent afternoon fog off the bay. It’s a perfect microclimate for Pinot and Chardonnay. The wine pictured at the top of the article is one of my favorites: Dylan David Pinot Noir, a Dijon 115 clone, estate grown and bottled by my friends Craig and Cathy Handley of PV Vines. Try a bottle if you can get it in your area. If not, salmon also pairs nicely with Chardonnay. La Crema, located in Sonoma County, is widely distributed and consistently one of my favorite labels.