If you’ve ordered wine in a fine restaurant, you may have interacted with the resident sommelier. In addition to employing their vast knowledge of all things wine to help their customers choose a great wine for the occasion, sommeliers typically hand pick the wine menu for the restaurant, manage the cellar and train the wait staff on wine related matters. Only recently have they begun to share the same status as celebrity chefs.

Becoming a sommelier is a serious undertaking. Structurally, it is similar to many trades where you attend school then take a certification exam for each level of expertise. It is generally accepted that there are four levels of sommelier-dom: Introductory, Certified, Advanced and Master. At every level, students are instructed and tested in three categories: wine theory, tasting, and service. You must exhaustively study the history of wine, and you must to be able to identify by smell and taste any wine’s varietal and country of origin. And the service part: you must be able to defuse difficult customers.

The Master certification is governed worldwide by the Court of Master Sommeliers, while the lower three levels are governed by different organizations depending on country. In the U.S., sommelier certification is provided by the North American Sommelier Association. Yes, their initials spell NASA. Is it just a coincidence that the Culinary Institute of America has the initials CIA? What is it about food and beverage organizations sharing government acronyms?

Pictured below is the 2014 graduating sommelier class from the International Culinary Center in Silicon Valley. These students have two weeks after graduation to prepare for the Certified Sommelier Exam. 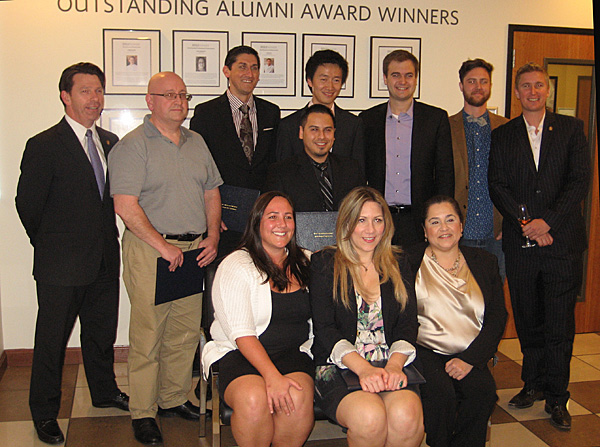 If you enjoy wine themed movies, then you might recognize instructor Ian Cauble on the far right. Cauble starred in the documentary film Somm, which tells the story of a group of young people preparing for the grueling Master Sommelier exam, which Forbes Magazine termed “the world’s toughest test”. Cauble and Alan Murray (far left) are among the elite group of just 214 Master Sommeliers in existence. Even though Australia has many renowned wineries, Murray is the only Aussie to become a Master Sommelier.

The film Somm is well worth watching if you have any interest in wine. It’s beautifully photographed, informative and suspenseful and the scenes are separated by entertaining shots of wine glasses being destroyed in creative ways. You’ll be amazed at not only the vast knowledge of professional sommeliers, but their ability to recognize and describe every nuance of the aroma and flavor of a glass of wine. In one scene, one the students insists that the varietals in his blind tasting are out of order. The Master Sommelier Instructor merely smells the wine in the one of the glasses and states with authority “they are in the correct order”. 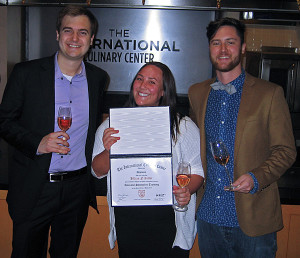 It is a noble, challenging and rewarding profession that was brought to my attention when I attended the Somm film premier at the Del Mar Theater in Santa Cruz.

Now all things sommelier have been brought closer to home; my stepdaughter Jillian Ritter is one of the aforementioned International Culinary Center graduates (pictured at right at graduation with two classmates).

During her studies, a considerable number of wines were “examined” at our kitchen table. Let’s all wish Jill good luck on her exam. [Update: Jill passed and is now a Level 2 Certified Sommelier.]

Stay tuned for an upcoming trip to one of the oldest wine growing regions of California, the Livermore Valley.